skip to main | skip to sidebar

The bad Liz
I was born and raised in Detroit, Michigan. I am still living in the area, although I spent 3 years in Germany (Stuttgart). Fighting the age long battle against the bulge. Some days I am winning, some days the bulge is winning. I hang out with my dogs (three toy fox terrierists) and husband.

I love my drive to work. I drive on I-94 through the cities of Dearborn and Detroit to get to my lovely place of employment (which shall remain nameless).

I am just beginning to learn how to drive this stretch of highway even though I have worked here for 14 years.

I-94 equals the speed limit once you are in the city of Detroit. If you go the posted speed limit of 55mph, you will be overtaken by people driving 20 year old cars (and don't care) or jokers in their Yugos who believe that they pedal fast enough to drive in the left lane. Without turn signals.

Amazingly, when you leave Detroit and the speed limits increase to a posted 70mph, people actually slow down as this is where the police hide in plain site. In the 70mph area, people drive about 68mph.

When did turn signals on automobiles become an option? Do you have to pay more to get them?

Did I miss that part of driver's ed that mentions that you only need to use them when no one else is alone?

And why, if the speed limit is 70mph and drivers are driving 70mph - why do they put on the brakes when they see a cop on the side of the road.

Hello, people - you aren't braking the law, why are you slowing down?

What a nice cruise.
We left Fort Lauderdale on January 19th and returned on January 24th.
We had stops in Ocho Rios, Jamaica and Georgetown, Grand Cayman.
During our travel at sea days, I beaded with friends - old and new.
Below is a picture of Sharon and I with a new boyfriend. 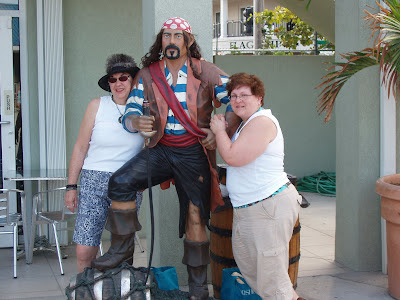 On Jamaica, a number of us did an excusion called
"White River Tubing and Safari" - it was wonderful!
Here's a picture of Alan on the river. I don't like my picture, so I am not going to post it. 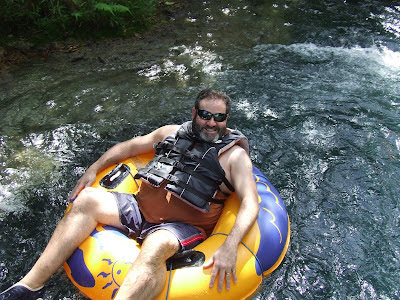 With temperatures in Michigan hovering in the teens (or lower), it was a perfect time to go on a cruise with 18 of us – bead crazed babes and hubby. Poor guy! Although it is funny that one of the woman asked a friend of mine if that was the same husband that I had last year (he is – he’s lost 30 pounds and cut 14 inches off his hair). We left out of Fort Lauderdale and headed to ports in Jamaica and Grand Caymans.

Shelley, Lynn, Estelle, Sharon, Terry, Mikee (all from Ohio), Deb, Sherry (both from Virginia) Brenda, Tina (both from Florida), Marie-Minnesota, Caroline-New Mexico, Carol, Margaret (both from Chicago area), Connie (sorry, I don’t know where Connie’s from) , Jill and myself (both from Michigan) were eager participants.

Our first day on the Navigator of the Seas (Royal Caribbean), we had workshops, not organized classes. This was really good for those who wanted to have a spa treatment or hang out in the pool, or just bead on their own. Our “goodie bags” were fill of items donated by different vendors/companies in the bead world – Bead and Button publications, Beady Eye Girl, (remind me to fill in more names).

In Jamaica, there were several members that decided to go on the White River raft trip – Estelle, Margaret, Sherry, Sharon, Alan, me, Deb, Brenda and Tina – what a cool trip. We had a guide named Clayton who gave us a little history of the area. He did little to dispel the myth that Jamaicans say “yah Mon” after every sentence (although I wonder if he did it for us tourists). We were all outfitted with a life vest, jumped in a tube in a cool Jamaican stream, and away down the river. Some of the rapids were a good white water, some were ripples. We laughed and sang our way down the river.

Being that Alan and I do a tubing trip in Michigan every year for 4 hours – this 1.5 hour trip seemed way to short. But at the end of the raft trip in Michigan there isn’t a fully stocked bar with double shots!

Following that trip, we ended up back at the port where Estelle, Sharon, Shelley, Alan and I had lunch – which included a Red Stripe beer. I couldn’t leave Jamaica without having a local beer. As we were getting back on the ship, a few raindrops came out of the sky – just like the country was sad that we were leaving.

The next morning we found ourselves in the Grand Caymans – beautiful blue seas!!! We got on the tender for a little shopping and then joined our excursion on the Nautilus – a semi-submersible boat with huge windows. We toured over a couple of shipwrecks, and coral reefs to an area where we could snorkel. I enjoyed this, but since I couldn’t wear my glasses, I don’t know if I would do this again. I came out with a monster headache – partly because I had to squint to see anything, and partly because I was hungry. After our return to shore, we decided to head to lunch (we being Lynn, Caroline, Mikee, Terry, Alan and I) at Senor Frogs – great nachos, large enough for 3-4 people. Also, it had great cocktails!!!

Our dinners were reserved for the later dinner – which I think we learned that we didn’t care for as much as an earlier dinner. Several nights we ate at the buffet, which is where we learned that they have SUSHI every night. Open beading went on several nights until midnight or later. Many people went dancing and drinking in the evenings.

I sincerely enjoyed myself – as I have every bead cruise that I have gone on. I know that I got to know many of the beaders better this year.

Also, this year, I have inducted Lynn and myself to the “baby bling” category of jewelry buyers – this just means that we purchased jewelry, but not enough to be in the “Bling Diva” section of the cruisers!!!
Posted by The bad Liz at 4:43 PM No comments: 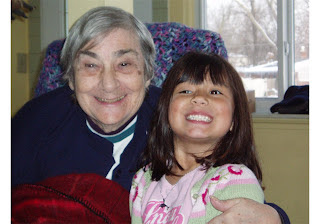 Sheila and granddaaughter, Isabel, Christmas 2005
Although my husband's cousin beat me to this post, in honour of Sheila's memory, I will do one also.

Andy posted in his blog about the death of my mother-in-law on New Year's Day. I received the phone calls from the hospital and the nursing home, and Alan and I drove to the hospital - she was gone.

Any person who has a loved one with Alzheimer's knows that this is one of the worst illnesses imaginable. Sheila didn't know anyone put her own son at the end - I was perhaps just a lady who came with Alan.

A couple of small stories: Last February, I received a telephone call from my husband. He was at the nursing home with his mom. He was laughing so hard, because of the news that he had to tell me. His mother just told him that she was getting married, the man was very rich, and she was 4 months pregnant (remember - she's 76 years old and in a nursing home). Sheila was so happy, and Alan was boing happy for her also.

The next one is when I was at the home just after her death. I went to pick up the belongings that we weren't donating to the home. I was on the intercom with the unit to have someone let me in, and a nursing aid was standing next to me. The aid was stunned - having seen Sheila just two days prior. She told me that Sheila was upset because her son, Alan stole her toothbrush and toothpaste. Sheila told the aid that the just telephoned her son and he was on his way back to the home with another toothbrush.

She did know her son until the end. And that's a good thing. 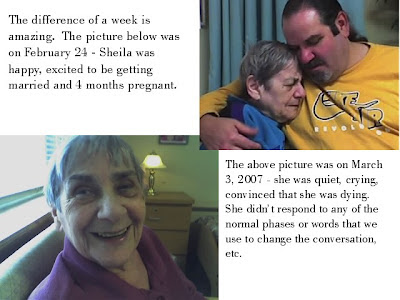 If someone steals my identity, can I send them all my bills?
Posted by The bad Liz at 5:16 AM No comments:

...do what sleeping dogs do.
I'm home from work today. Just a grey day in Detroit.
When I walked through the bedroom just now,
I saw a sight that made me smile. 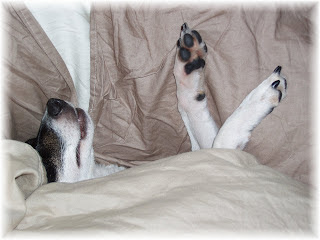 Chloe crept under the covers of the bed.

Obviously has gotten a little warmer than she would like.

She didn't move while I took several pictures of her.

(The other two are under my workbench, near the heat vent, sound asleep. 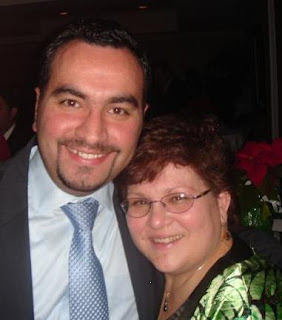 One of my resident physicians, Mouhsen Al-Hakeem and I at the holiday party.
Yes, my husband was there.
No, he doesn't mind that I flirt with the young boys.
Posted by The bad Liz at 5:53 AM 1 comment: 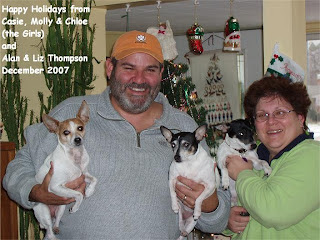 All the best to everyone for a great holiday season,
Regardless as to which holiday you celebrate,
or choose to not celebrate.
Enjoy life, peace and the fellowship of your friends and family.
And the dogs, we can't forget the dogs.
Casie, Molly and Chloe wish that all the dogs have a warm blankie,
a bowl of fresh water and a good biscuit to chew on.
Love - Liz
Posted by The bad Liz at 5:36 AM 1 comment: